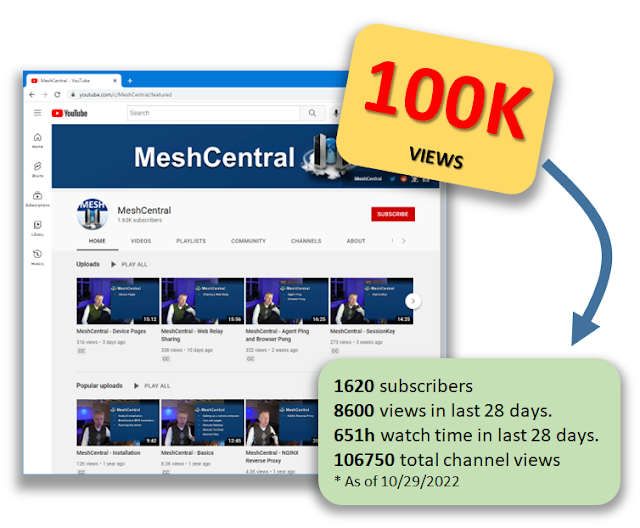 MeshCentral is an open source, web based, feature packed computer management web site. The MeshCentral YouTube channel keeps hitting new milestones with now over 100k views and videos keep being released every Wednesday with no end in sight for new topics to cover as MeshCentral continues to evolve quickly. On the topic of MeshCentral’s new features, this week no less than 4 more messaging and notification integrations were added to MeshCentral making it easier then ever for users to get notifications from their MeshCentral account on the device and application they prefer. Discord , XMPP , CallMeBot and Pushover where all added along with documentation on how to setup them up and use them. In detail: MeshCentral YouTube channel . The channel continues to grow in popularity with around 8600 views and 651 hours of view time in the last 28 days and now, over 100k views in total and over 1600 subscribers. Big thank you to the community. There are now 95 videos on the channel and videos
Read more

MeshCentral is an open source, web based, feature packed computer management web site. The big news this week is of course that I am back from vacation and catching up on all the requests. On the technical side, this week has been great with the addition of messaging integration and Telegram into MeshCentral. People often use messaging applications on their phone and desktop and MeshCentral can start taking advantage of this. In addition, work as been done on adding the Bosnian translation to MeshCentral. In detail: Back from vacations . After 6 weeks of vacation in France it’s great to be back and developing new features again. In the last 6 weeks I was in the south of France with visits to Italy, Monaco, Spain and Andorra. I have no idea Andorra even existed until this trip, it’s a fun place. Among 100’s of places I visited, I visited Pont du Gard (left on the picture below) which is the tallest of all Roman aqueduct bridges , and the Millau Viaduct (right on the picture below) whi
Read more 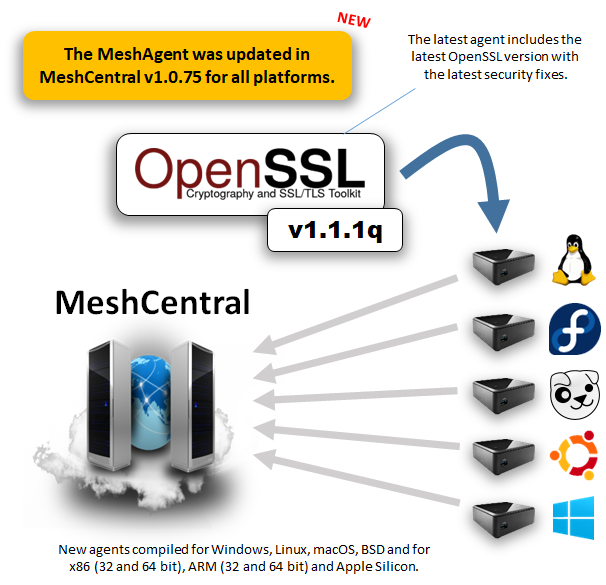 Note that I am out on Vacation until October 17th, 2022. These last two weeks have brought a lot more improvements to MeshCentral. The most significant change is a new MeshAgent by Bryan Roe compiled on all platforms (Windows, Linux, macOS, BSD – x86, x86-32, ARM, Apple Silicon). The updated agent brings more stability, less memory leaks, updated OpenSSL and additional features. On top of this, the server has gained many more features including support for accounts with 1000’s of devices, custom SMS gateway support, help request emails, LDAP and OpenID membership improvements and a more. It’s been a crazy two weeks with lots going on. In detail: MeshCentral agent update . Each time MeshCentral is released with a new MeshAgent it’s a big deal as all devices running the agent will get updated when the server update. So you don’t want to mess that up. Bryan Roe worked on new agent code that has undergone more rigid testing and many fundamental issues have been fixes. You can see the compl
Read more 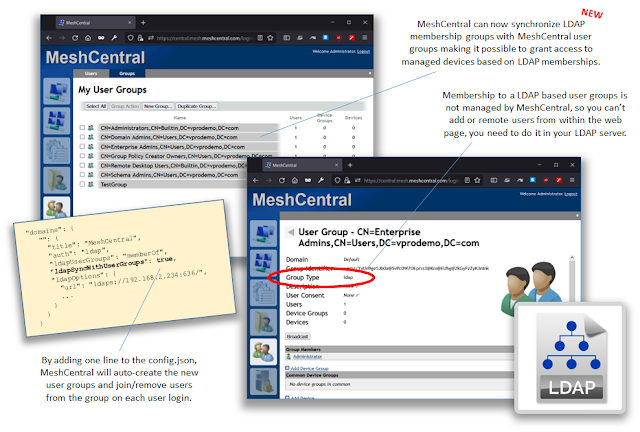 This week has been huge for MeshCentral with many more improvements and features. Many of the new features are aimed at enterprise deployments with much improved support for Microsoft Active Directory (LDAP). One of the big news this week is that MeshCentral is now capable of allowing user login and granting devices access rights to LDAP users based on their LDAP memberships. This is important for organizations deploying MeshCentral as it allows LDAP policies to apply to MeshCentral instances. Also, this week saw improved support for running scripts on remote devices, drag & drop support for running scripts, the addition of two more back-end databases (SQLite and AceBase) and more. In detail: MeshCentral synchronization of LDAP membership groups . If you’re running MeshCentral in a large enterprise, you will connect MeshCentral to an Active Directory (LDAP) and will want user policies set in LDAP to affect what a user has access to within MeshCentral. This is exactly what MeshCentr
Read more 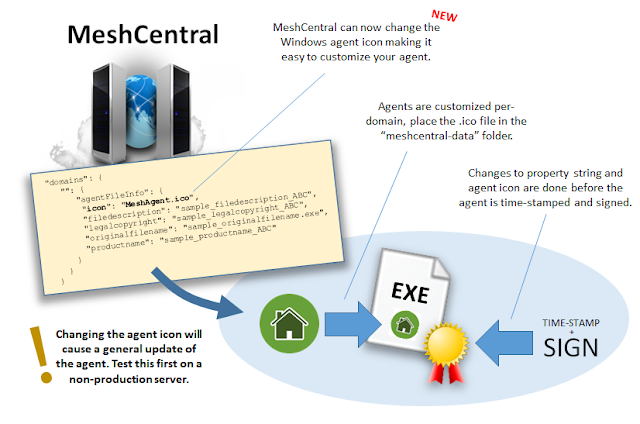 This week the big news is that MeshCentral has even more advance code to break apart and re-assemble Windows executables. This code has gotten so good, each section of the executable (code, data, resources, etc.) can now be resized to any dimension needed. This code can now replace bitmaps and icons in a Windows executable prior to timestamping it and signing it and as a result, MeshCentral can now customize a Windows agent even more than before. You can set a different icon file (.ico) for agents in each of your domains. Now, the MeshCentral Agent can have your company or customer’s icon on it. This is all done in seconds on MeshCentral server start. As far as I know, MeshCentral is the only server to do this. On top of this, many more improvements this week. In detail: MeshCentral can now customize Windows agent icon . It’s difficult to break a Windows executable apart, modify the internals and re-assemble it so that is can still run correctly. Many tables, pointers and alignment iss
Read more 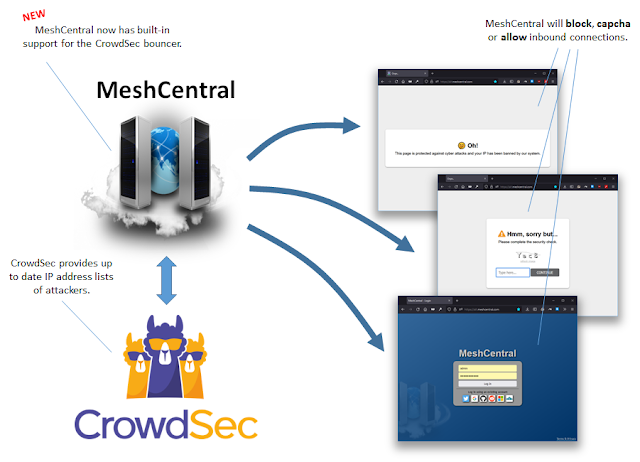 MeshCentral has kept up its evolution with many more security related improvements. The big one this week is the integration of a CrowdSec bouncer that is now built-into MeshCentral to allow rapid and collective reactions to internet threats. We also have an improved LDAP integration with account images, optional CAPTCHA for new accounts on the login screen, a powerful improvement to DNS web relay to allow multiple HTTP/HTTPS session at the same time and more improvements to MeshCentral Router and the MeshCentral web site. On a personal note, I will be taking vacations from September 7th to October 19th to mostly travel and relax in Europe. In any case, here are this week’s developments in detail: CrowdSec bouncer integration . CrowdSec is a French company that runs a free, open source, community driven IP address reputation service. Servers install the CrowdSec agent and notify the CrowdSec server of detected threats and from what IP addresses they are coming from which is then sen
Read more 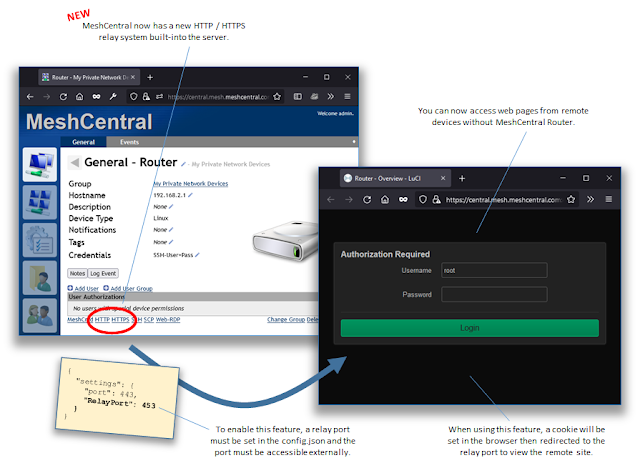 The big new MeshCentral feature this week is web relay, which makes it easy to access any web site that is on any private network that has a MeshAgent is running on it without using any routing software or VPN. This has been a feature that was requests by the community for a long time, since MeshCentral runs within a browser and can route traffic to any network when a MeshAgent is running, it should be possible to click on a link and access remote sites. However, this is much more difficult than it would first appear since the MeshCentral server needs impersonate a remote site. On top of web relay, we have a laundry list of new features including pre-account SSH credentials, improvements to Web-RDP, mouse wheel configuration and more. In detail: Web Relay . We have a video demonstration of this feature here . This new feature allows the MeshCentral server to “impersonate” a remote web site and route all the requests thru a remote agent to a designated target. It allows users to quickly
Read more
More posts